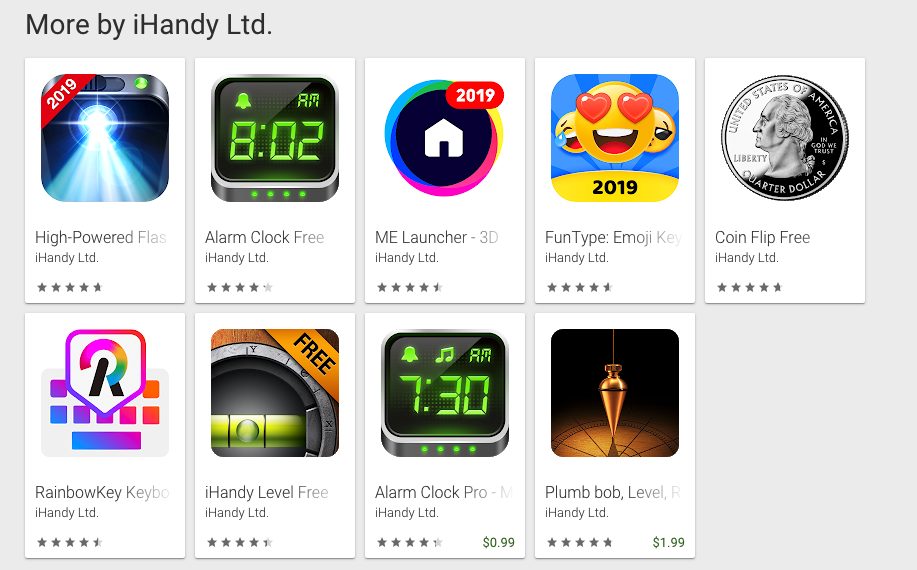 A report by Buzzfeed News published today says that Google quietly removed 46 apps by iHandy from the Play Store last week. iHandy is a Chinese mobile app developer, that makes selfie, security, antivirus, keyboard, horoscope, emoji, coin flip, health, and utility apps. Collectively the developers apps have been downloaded tens of millions of times. At this moment, nine apps made by iHandy are still live in the Google Play store.

As Google has not yet offered an explanation for the removal, the abrupt deletions of so many apps from a single developer based in China is causing speculation. Since nice of iHandy’s apps still live it’s unclear whether the apps, were involved in malicious activities or something else.

An iHandy executive told Buzzfeed that the developer is trying to establish the reason for Google’s removal of the apps. Speaking also with Buzzfeed a Google spokesperson said the investigation is ongoing, confirming that iHandy apps were also banned from the Google ad network.

As we reported a few days ago, cybersecurity firm Wandera found two camera apps contained adware and were removed from the Play Store by Google. In the case of iHandy, however the reason the apps were removed is a mystery.