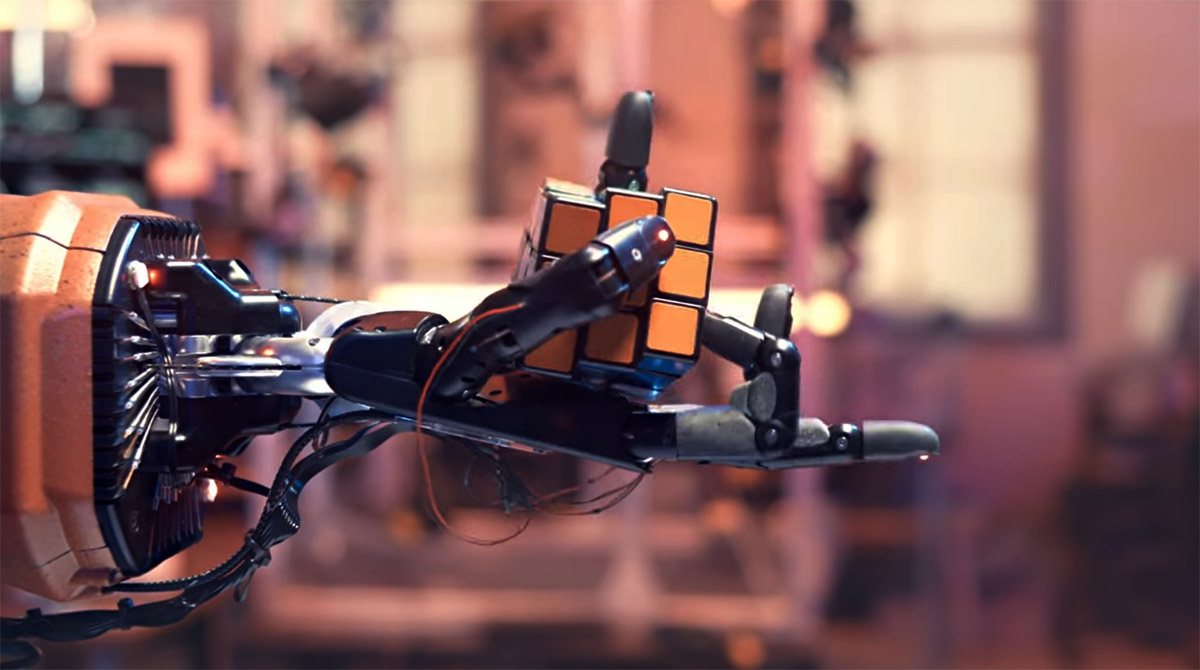 OpenAI is an artificial intelligence research organization on a Crusade to build general self-learning AI. The group’s robotics division says Dactyl, its robotic hand they built last year, has learned to solve a Rubik’s cube.

Automated Rubik’s Cube solving robots are far from new. Guinness World Records has a dedicated category for them. But the OpenAI feat stands out because This AI powered robotic hand figured out how to unscramble the cube without human programed instructions.

The achievement used a training technique developed by OpenAI that could lend itself to building more dexterous and more autonomous machines. This may change human robot relations in a real way. Most robots in existence are extremely limited to specific tasks.

What OpenAI has done is a step towards training an AI to move and operate in the real-world. OpenAI has shown success training AI’s in cyberspace using machine learning models.

The basic concept of machine learning is to create a virtual environment for the system to operate. The AI over time learns through trial and error. After a few million attempts, the neural networks can learn to play hide and seek or walk on two legs.

The real problems start when the AI is installed onto a robot. Simulations don’t currently account for all real-world variables. This means machine learning models often end up facing challenges with no training to resolve them.

OpenAI’s new training method, helps train the AI, and therefore the robot hand to deal with the unexpected. This is done by injecting uncertainty into the training simulations. For example varying the impact of gravity between simulation learning sessions.

“One of the parameters we randomize is the size of the Rubik’s Cube,” OpenAI’s researchers elaborated in a blog post. “ADR begins with a fixed size of the Rubik’s Cube and gradually increases the randomization range as training progresses. We apply the same technique to all other parameters, such as the mass of the cube, the friction of the robot fingers, and the visual surface materials of the hand.”

A second machine learning model is used to control the processes. The AI is used to make the simulation progressively more difficult as the hand’s AI improves. “As the neural network gets better at the task and reaches a performance threshold, the amount of domain randomization is increased automatically,” explained the researchers.

The project has shown promising initial results. When the model was broken out in our corporeal world, the robotic hand managed to solve a Rubik’s cube while wearing a rubber glove, with a few fingers attached to each other and even when the researchers tried to hit the cube with various objects.

OpenAI believes that the training technique may have applications in far more serious projects. They say the method could enable industrial robots, drones and other autonomous machines to adapt their behavior when encountering an unforeseen hindrance. Versatility is an important step towards, self-learning artificial general intelligence.

This Rubik’s Cube solver is one of the first major projects OpenAI has detailed since starting a $1 billion partnership with Microsoft a few months back. Under that July deal, Microsoft will fund the lab and provide cloud infrastructure in exchange for IP access.

This is a big achievement for AI, but it’s also worrisome. An AI is now being used to train an AI. That AI is now out of cyberspace and on the hand of a robot. I’m left thinking is OpenAI creating the next stage of human evolution, and asking what will happen to us flesh and bone humans?